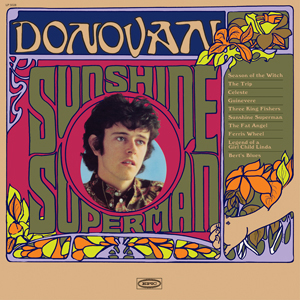 By 1966 Donovan had evolved beyond his initial folk troubadour style and fully embraced the budding “flower power” movement. Finding inspiration in jazz, blues, world music and West Coast U.S. rock, he partnered with top UK producer Mickie Most and arranger John Cameron to capture the sound he was pursuing in his mind. Their first collaboration, the “Sunshine Superman” single, was a smashing success, reaching #1 on the U.S. charts and establishing Donovan as a major pop star. Containing a prominent psychedelic vibe and featuring exotic instrumentation like sitar and tablas, it foreshadowed the Summer of Love zeitgeist by a full year. Recorded at EMI Studios London, it also featured session guitarist and soon-to-be Yardbirds/Led Zeppelin member Jimmy Page.

Upon signing with Epic Records in the U.S., Donovan, Most and Cameron traveled to Los Angeles to continue recording at CBS Studios. The subject matter of the songs ran the gamut, reflecting Donovan’s interests and influences. “The Fat Angel,” a tribute to Mama Cass, also name checks The Jefferson Airplane (who returned the favor by covering the song on their live album Bless Its Pointed Little Head). “Bert’s Blues” honors UK folk pioneer Bert Jansch, a major influence on Donovan, Page and many other British guitarists. “The Trip” salutes the L.A. club of the same name and mentions Bob Dylan, Joan Baez, director Federico Fellini and the Buddhist concept of Zen in the lyrics. Elsewhere, the foreboding “Season of the Witch” served as the dark reflection of the cheery “Sunshine Superman” and remains one on Donovan’s most intriguing songs.

Sessions for the Epic album, to be titled Sunshine Superman, concluded in May 1966 and it was released in the U.S. in September of that year. Due to a contract dispute with his former label, Pye Records, the album was not released in the UK until 1967, and then in a greatly altered form. The dispute, stemming from Donovan’s move to Epic, delayed the UK release of future recordings as well. This legal wrangling put Donovan in the rare position of a UK artist whose records came out in the U.S. before they appeared in his homeland. This Sundazed reissue has been sourced from the original analog Epic tapes in the rare U.S. MONO mix! Cameron’s arrangements sparkle as the instrument lineup varies from song to song (listen closely for Shawn Phillips on sitar!) as Most’s production expertly frames each track. Above all, Donovan delivers an incredible collection of songs, perfectly preserving a moment in time. It is now yours to enjoy forever.

Other albums available on vinyl