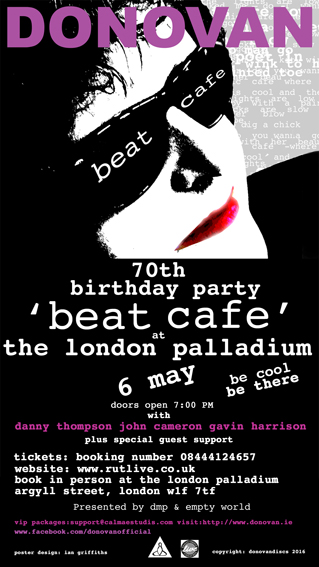 Donovan, ‘60s legend, icon, poet and one of our most enduring singer-songwriters, celebrates his 70th birthday with a special concert at The London Palladium on 6th May 2016.

Fans will be treated to Donovan’shistory of all his hits, including ‘Sunshine Superman’, ‘Mellow Yellow’, ‘The Hurdy Gurdy Man’ and ‘Jenifer Juniper’, plus his legendary storytelling and cult songs, all in the glorious splendour of the historic London Palladium.

Everybody is invited to come to the party and experience Donovan’s early bohemian roots, where he will perform on stage in a theatrical ‘Beat Café’ with his band, Danny Thompson (bass), John Cameron (Piano) and Gavin Harrison (drums) and a soon-to-be-announced special guest.

Donovan says, “I am delighted to be having my party at The London Palladiumto thank all who have followed my work from the beginning, and to all who have just discovered me. Come in shades and berets. Be cool, be there!”

Donovan’s 70th birthday party concert also continues a celebration of his 50th year in the music business, which saw the recent release of ‘Donovan Retrospective’, a 2CD anthology of hits and album tracks chosen by Donovan himself, plus the brand new track ‘One English Summer’.

This most auspicious anniversary marks a major renaissance for the man whose fingerprints can be seen throughout the last half century of popular music.

Donovan headlined the accoustic stage at Glastonbury 2015 before completing an extensive thirty-two date city tour of the UK.

Donovan was 18 years-old when he had his first hit, ‘Catch The Wind’, for which he received the prestigious Ivor Novello Award. Since then, the man born Donovan Leitch in Glasgow, Scotland in 1946 has been a popstar and folk troubadour, a flag bearer for all things psychedelic, and one of the early adopters (and subsequent promoters) of transcendental meditation, now one of the most recognized, and practiced, meditation techniques in the world.

It’s all a long way from that heady decade that birthed him, but celebrating fifty years in the music industry has confirm Donovan as so much more than a mere heritage act. He is the history of British rock and pop distilled into one man. He is an institution, and his legacy and influence will ensure that he is part of its future, too. Come and hear why. Don’t miss out…